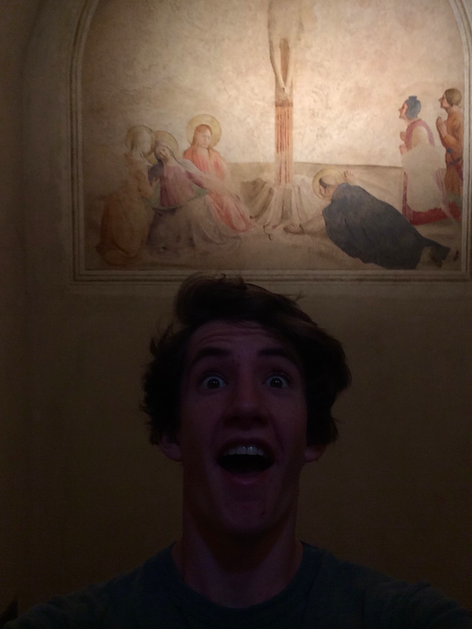 When we flew into Italy I was very sleepy on the plane. We were flying quite low as we flew into Genoa, and we could see many buildings, and I thought everything was quite large.
Franco and Silvia were waiting for us at the airport. they seemed very nice. Franco seemed like a cheerful guy and Silvia seemed loving. I couldn’t get over people driving on right hand side of the road. They took us to their Genoa house for a little while, about an hour. It was amazing looking out from their verandah over all the roofs of the old city. Genoa is on a steep hill. While we were waiting I climbed up the wall of the local shop, but I growled at by a staff person who was sitting in a car.
We were surprised how cold it was, although it was sunny. We stopped on a bridge and looked down into the old city main road.
(picture)
Then we drove to Rapallo, and I slept most of the way in the car! It didn’t feel like we drove anywhere because I was knocked out within 5 minutes.
Their apartment in Rapallo is next to the shore and the castle which has been turned into an art gallery. Silvia cooked up a bought pizza which was nicer than NZ frozen pizzas.

We had 5 days in Rapallo. The town reminded me a lot of the game ‘Assassin’s Creed’, with all the old buildings close together with narrow streets. Mostly it was sunny but quite cool. I did go for a swim one evening, which was colder than Linton’s river but quite nice in the ocean. After I dipped in the water I found myself skimming stones. I was pleased with myself because I got some very good skimming stones. When you get a really good one the stone almost slips across the surface of the water rather than bouncing off, so I don’t know how many bounces I got but it was pretty impressive if I say so myself.

One day I decided to go out and do some parkour and some of the local boys recognised the tshirt I was wearing as a parkour top. They asked me “Scusi. Parkour?” One of them did do parkour. I also enjoyed the trampoline in the park by the sea, though I had to pay for it.
Franco took me to see his boat. It was a little bit awkward being with Franco because he does not speak English. He tried to take a photo but he didn’t understand how to work it. The boat was cool, and I would have loved to go out onto the sea in it, and I am thankful for him taking me there. Franco has an amazing boat and has won many fishing awards with it. He was congratulated by the Olympic society, and has lots of big cups and awards in his house. One time he was the Italian champion fisherman.

We had two trips, one to Portofino and the other up the hill to Montelegro. Driving around the roads was crazy, Mum was freaking out about how narrow the roads were, with cars and busses squeezing between narrow cliffs and the edge of the sea.
The worst thing was when we were get into a carpark building in Portofino and Franco was having trouble getting his car in the small space. Physically painful! It did not help that I was quite tired that day. But it was worth it as we were climbing up the old Roman track to the fort on the cliff. It was incredible view. At the top there is an old castle which I looked around. I did a couple of front flips off the castle wall, one of them I landed on my butt!
The castle was very cool. You could see parts of it, esp the entrance, which had been the same for 2,000 years. Very old solid rock. From there they could see in 3 directions out over the Mediterranean sea, an excellent fortress point.
(photo)
They had also built an old church there. In Italy there are churches EVERYWHERE!
Portofino is very famous for being very pretty with all coloured buildings facing the sea. There were HEAPS of tourists there.

Our other trip was up the hill behind Rapallo to Montelegro church which is way up high on a sharp ridge line. We drove up with Silvia and Franco and had a awesome lunch in a restaurant half way up. The view at the top was great, and I enjoyed walking on the edge of the wall, and in some forest. We came down on the cable car which was lovely.

We caught the train to Pisa. We got confused at the railway station but we worked out where to leave our bags for a few hours while we walked to the ‘Leaning Tower’. Mum was stunned by how many people were there, and how far it seemed to walk. I didn’t know that the tower was so close to such a huge cathedral. It is a big grassy area with hundreds and hundreds of people there. We decided not to queue and pay to do the walk. Mum snuck into the cathedral by a side door and I stayed outside doing some juggling while some kids were watching. I didn’t want to take the cliché photo of pretending to hold up the leaning tower.

Another train got us to Florence. We stayed at a little place called 4 Rooms, and it was cool. I liked it. It just 4 bedrooms and a kitchen. Our room looked out over a busy street, and the street
We could see that there were shutters but we couldn’t work out how to get them to come down. I tried pulling it down, and I tried opening the box where they were rolled up. I thought it would make sense for there to be buttons to make it work so I looked around and found a switch, and it worked, the shutters rolled down over the big window so it was nice and dark. Still quite loud though with the traffic, especially the ambulances.
Hong Kong

It feels like we had more than a whole day in Hong Kong. There was a lot of waiting at the airport, it seemed to drag on for hours and hours, both arriving and departing. We finally got out and had a lovely dinner at a little noodle house in Wan Chai district, on Johnston Rd. I had noodles & pork chops which was lovely. I really did enjoy it. It was midnight Hong Kong time which was 4 in the morning NZ time! At the noodle house we got brown water – intentionally brown I hope, presumably some kind of tea. When you finished it got replaced.
Then we found our hotel. It was nice. Our room was on the 12th floor. The view was of lots of other buildings, some of them looked pretty run-down. I fell asleep as soon as I hit the pillow.
In the morning we went out walking. It was really warm but it didn’t affect me much, I quite liked it. We found our way through so many people, up walking bridges over big roads, through mindbogglingly tall buildings, heading for the ferry terminal. By the water was a huge construction site. It was noising and smelly and dusty. Finally we could see the sea, but we could hardly see across to the other side, as the air was so smoggy. It made me sad to see the air pollution. At the ferry terminal we had to buy a plastic token in the machine, which we put into a turnstyle.
The ferry was a wooden boat facing two directions. We couldn’t see the driver, who was below. It was nice to be out on the water. I loved the feel of the wind moving my Tshirt, in the tropic heat. It was refreshing. But I hated to see all the plastic floating the water. We even saw a whole tarpaulin.
We decided to stay on the ferry when it got to the other side, but the guard made us get off. Good thing too. We had a cool time around the Kowloon ferry area. It had been made into a big plaza area, by an enormous theatre. I had fun running up the wall, then along a raised walkway. There were lots of tourists there but it felt quite relaxed.
A block over was an old building from 1881 when the British were there. It had been a police garrison, and still had some old big guns on the verandah. It is not an elegant restaurant and Mum had a lovely cut of tea. The British built a Time Ball there, which has been restored. At 1pm it lifts up a big metal ball and at exactly 1pm if drops down. I wanted to climb up onto the roof but Mum thought I’d get told off.
It was very nice there, with big trees with roots hanging down like hair. That was cool.
After that we found some shops, and Mum bought some new glasses to replace the one she left on the plane. I had a milky icecream soft-serve, and we came back on the ferry and back to our hotel for a rest.

I really wanted to go for a swim, so we caught the tram up the road a few blocks. Causeway Bay is where the most shops are. We could not believe how many watch shops there were!! I got undies & socks at a trendy clothing shop, for $220 each!! (which only is about 8 NZ dollars but it seemed a lot of money)
We went into a supermarket; I enjoyed the vast variety of objects. I chose sushi, a dragon fruit and a mango. The mango was the best, it was amazing! Dragon fruit look fabulous on the outside, bright pink with green leaves, but inside it is a bit tasteless. We ate them in Victoria Park sitting but a pool which wasn’t a paddling pool because the sign said “No paddling”. Some kids had remote controlled boats. The sun was hot, and footpaths were hot. It was nice to get into the water in the public indoor swimming pool, so we stayed there for a while.

Things about Hong Kong which were really cool:
The trams on Johnston Rd. They were so narrow and tall. It was great sitting on the top floor.
I quite liked the heat. It was a shock leaving buildings with air conditioning, like stepping into a warm bath.
Cheap prices on electronics especially. Great having my iPad screen repaired
​Best ever mango!!

Things about Hong Kong which I didn’t like:
It was hard to buy healthy food. All the food stalls seemed to be deep fried and white bread buns
The plastic in the sea, and smog in the air
Not knowing the language was frustrating sometimes, but a lot of people spoke some English, and a lot of the signs.
Constant sound of construction. Every block had new buildings going up

Things which made us laugh
The scaffolding on buildings made of bamboo
All the big 4WD wagons everywhere with plush leather seats
Silvia was intrigued that it was old women who were clearing away rubbish on the streets and outside shops
Road cones – we thought we’d left them behind in Christchurch
Squash of people everywhere
The alleyway with lots of little hardware shops in it, everything crammed in to a tiny shop.
​
www.conversations.net.nz
Written by Silvia Purdie
Resources for life and faith
Proudly powered by Weebly