This paper is available as a pdf HERE
Psalm 15

1 Lord, who may dwell in your sacred tent?
Who may live on your holy mountain?
2 The one whose walk is blameless,
who does what is righteous,
who speaks the truth from their heart;
3 whose tongue utters no slander,
who does no wrong to a neighbor,
and casts no slur on others;
4 who despises a vile person
but honors those who fear the Lord;
who keeps an oath even when it hurts,
and does not change their mind;
5 who lends money to the poor without interest;
who does not accept a bribe against the innocent.
Whoever does these things
will never be shaken.

Psalm 15 is a good framework of ethical principles. It begins with the question ‘who can live in God’s presence?’ and finishes with the statement that whoever ‘does these things will never be shaken (v5). In five verses it sets out godly ethical principles for life.

1. First do no harm: Nonmaleficence

Medical and social service ethical frameworks start here - do no harm, or inflict the least harm possible. This is important to protect against ‘the ends justifies the means’. It is also the principle of self-protection, which is a ‘Safety First’ motto. For instance, in any First Aid or ‘first responder’ situation the guidelines insist on ensuring your own safety before going in.
Psalm 15:3: an ethical person “does not harm his friend” and does not damage other people’s reputations.
Ethical dilemmas may include choosing between more harm to less people or less harm to more people. Our world confronted this during the Covid-19 pandemic, as governments made hard decisions about whether to enforce lock-downs that did economic harm to many in order to prevent great harm (i.e. death from Covid) to some.
Another hot topic in our world today is about whether nonmaleficence extends to the natural environment, to animals, habitats or the atmosphere. As we begin to experience the effects of global climate change, people are working to extend this vital ethical principle to the planet as a whole, rather than being just human-centric.

Ethics seeks to benefit others. When challenged about his effectiveness, Jesus pointed to the practical outcomes of his ministry in terms of healing and lives restored (Luke 7:22), and taught that people should be judged on their ‘fruit’ of their lives more than fine words (Matthew 7:15-21). This principle calls people to act for the benefit of others - the ‘greater good’ - even when this might be personally costly. This is epitomised for Christians by Christ’s death on the cross.
In the Bible this is summarised in the word ‘righteousness’, which means ‘living right’ in ways that honour ‘right relationships’ and positive ethical principles (Psalm 15:2).
Discussion around ethics explores the issues of what we define as ‘good’ and how this is balanced against people’s tendency to choose things which are not good for them. A classic example is healthy food: many schools are moving to ban sales of pies and soft drink, despite kids wanting them. Who gets to decide what is ‘good’ for us?

The Greek word ‘autonomia’ means self-rule. The ethical principle of Autonomy is important to prevent some people from ‘automatically’ assuming that they know best for other people, or that other people should do what they are told to do. It is a check for power, often called ‘empowerment’ in our day.
In contemporary ethics an important component of autonomy is ‘Informed Consent’; an individual’s right to be given information, and as far as possible to exercise their own ability to make decisions affecting themselves. The alternative is powerlessness and manipulation.
Western cultures have placed the individual at the centre of ethics, and seen the principle of autonomy in terms of personal freedom, e.g. the USA dedicated to “liberty and the pursuit of happiness.” However, most cultures in the world are more communal and the highest value is the collective. Autonomy for Maori is defined as ‘Tino rangatiratanga’, self-governance, and collective authority.
The Bible, emerging mostly from communal cultures, does not have a great deal to say about individual rights and freedom. Paul, translating the Gospel into the Greek world, defined it in terms of freedom from slavery (Ephesians 5:1), however the purpose of personal freedom is to serve the community, “through love become slaves to one another” (Eph 5:13). Psalm 15:4 encourages us to ‘honour those who fear the Lord’.

The ethical principle of Fidelity means faithfulness and honesty. Jesus taught the value of speaking simply: “Let your ‘yes’ be yes and your ‘no’, no” (Matthew 5:37). The book of Proverbs sets out to give people “instruction in wise dealing, righteousness, justice, and equity” (1) and many proverbs have themes of honesty and integrity: “Put away from you crooked speech” (4:24). Psalm 15 describes someone who rejects lies, “speaks the truth from their heart” and “keeps an oath even when it hurts”.
In modern language ‘transparency’ is an ethical value demanded of all organisations.
However, there are ethical tensions when the call for openness compromises an individual’s need for privacy. Questions about who ‘owns’ what information and how much should be shared for ‘public good’ define the boundaries of confidentiality.

5. Stand up for those who cannot stand for themselves: Justice

“Better is a little with righteousness than large income with injustice.” (Proverbs 16:8). Justice is the call to uphold the rights of all, but with a particular concern for those who are less able than others to win their own rights. Jesus called his followers to care for “the least of these” in Matthew 25:40. Some churches summarise their mission as being to “the least, the last and the lost”. This includes children, the poor, the elderly. Feminists have called for justice for women, and indigenous people have sought restoration for the wrongs of colonialisation. This ethical principle concerns the whole question of whether there is a ‘level playing field’. What may seem fair to one person may look less fair when viewed from a different perspective.
Psalm 15:5 gives two examples of justice ethics: not lending money at interest, and not taking bribes against the innocent.
Justice also includes the legal side of ethics, following the laws of the land. 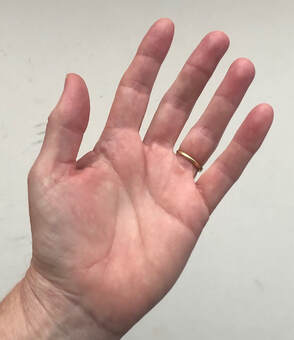 Five Fingers on a Hand

It is easy to remember these five foundational ethical principles by holding out your hand. The thumb is solid and strong: do no harm.
The first finger is what we use for pointing; it points towards the potential, the good that can be done.
The middle finger is the tallest, the “I” of autonomy, each person standing tall in their own dignity.
The fourth finger is the ring finger, wearing the sign of a marriage vow. This reminds us of the importance of being faithful.
The fifth finger is the smallest and weakest; reminding us of the ethical call to uphold those who are smaller and weaker in this world.

These five ethical principles are universal, accepted in some form in many civilizations and cultures. What particular contribution does Christianity make? Certainly these principles are in line with the teachings of the Bible on how to treat others well and form a functioning human society. However, in Christ there is a over-arching loyalty and calling. All aspects of culture, law and custom stand under Christ’s authority for those who claim Jesus as their Lord. Christian faith makes a prior ethical claim, that we belong to God, and our lives, actions and choices are called to express the person and values of Jesus. This does not necessarily contradict any of the five ethical principles, but it may throw them into a different perspective. A good example is Joseph’s claim after being restored to his family in Egypt that what his brothers had intented as harm, God had intended for good, in order to serve the needs of the entire community (Genesis 50:20).

In the metaphor of a hand, Christ is the centre, the palm, from which the ethical principles stem and which holds them together in harmony.
Perhaps the key word which a Christ-centred ethics brings is ‘grace’. John’s Gospel describes Jesus as being “full of grace and truth” (John 1:14). Grace rescues ethics from its tendency to become lists of regulations, ‘do’s and ‘don't’s. Grace is a living beating heart of what the Bible describes as the core attribute of God, “loving faithful kindness”. Grace forgives more than it punishes, and enables new beginnings and fresh possibilities despite the worst that humanity does.
www.conversations.net.nz
Written by Silvia Purdie
Resources for life and faith
Proudly powered by Weebly