What's with our logo? After our fires this week it seems like a good time to figure out why a bush on fire is the symbol for our church.

You'll remember the story - Moses was out with his sheep one day and he spotted a fire. He rushed to check it out, then realised that the bush was not blackening or burning out. The fire just stayed there and kept on burning. He came close and heard God speak to him out of the fire, and the conversation changed everything, for Moses and for his people.

Our Presbyterian ancestors chose the image of the burning bush as the logo for our church, and with it the motto, "Yet not consumed" (Exodus 3:2). For them, this was a powerful statement that no matter what the church faced we would endure. Suffering, attack and hardship will not overcome us, we will yet burn with faith and love for our Lord.

Christians have also seen in the burning bush the dynamic presence of God, the coming of the Holy Spirit, a personal experience of holy power. At Pentecost the people were appeared to be on fire but not burned.

The word for bush in the Hebrew is 'thorn' (for us a gorse bush), which echoes the lostness of humanity (Genesis 3:18). Fire was an important means of purifying; so Christians have made connections between the thorn bush and the cross. Christ suffered and died ('was burned'), burning away our sins with him, but as the bush was not consumed, neither was Christ destroyed.

In the Orthodox tradition it is called the 'unburned bush'; the flame is God's uncreated energy, which sustains the universe, which Moses glimpsed through the bush.

So much for symbolism and high theology - what have we in Cashmere learned about burning bushes this week?? What does a burning bush actually look like?

Our images of the Moses story are mostly tame, a static single bush, able to be safely approached. This painting by UK artist Mark Wiggin is rare in expressing the wild power of actual fire, the utterly terrifying possibility of encountering the living God close-up.

If we imagine the burning bush as a bush-fire rather than a glowing pot-plant, then Moses's actions seem quite insane; walking towards the fire, taking his shoes off (not a good idea near fire!), staying close to the fire. How did we get the idea that faith was safe?

Being close to the fires will be an indelible memory for us. We are so grateful that we have come through with our families and homes intact, even as we mourn with those who did lose their homes, and with the family of Steve Askin. We grieve also for our precious forest that was burned, and the ongoing impact on our birds and wildlife. We are confronted with our own vulnerability, and how quickly things we treasure can be destroyed.

Our logo of the burning bush reminds us that suffering will come, burning is pain, but that God is with us through this. We know the sustaining, renewing power of God. It is not a 'nice' logo, but it is strong. As we change and grow as a church some things will be burned away and other things will endure. As Paul puts it, "These three remain: faith, hope and love. And the greatest of these is love." 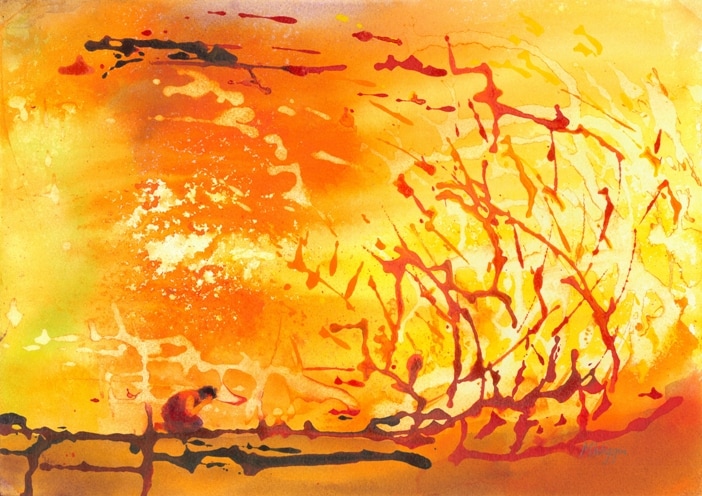