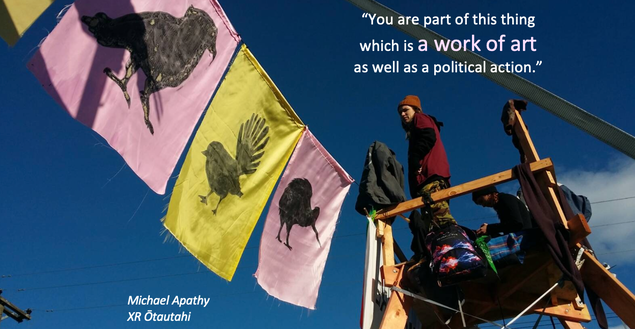 What does direct action look like on climate change?
What does it feel like to put yourself on the line?
​

"In the Heart of the Beast"

‘In the heart of the beast’: Climate action at the coal face
On Monday 2 May a group of 30 protestors occupied the Takitimu Coal Mine, forcing the mine to stop operations for day, in a collaborative action by Extinction Rebellion groups around Te Waipounamu and supported by Greenpeace and the Coal Action Network. One of the activists is a psychotherapist in Ōtautahi Christchurch, Michael Apathy (pronounced Apayti).
Michael describes some memorable experiences from the action:

It was a great moment at 5.00am on Monday morning. We had succeeding in getting in and we were all in place within the coal mine; the towers were set up at the entrance, the climbers were in place, we had a boat on the lake. “We made it! We have taken possession of this space.” Suddenly I felt a huge buzz and delight, that lasted through the whole day. Even though I'd had no sleep I had this peaceful, energetic, joyful feeling. It became a meditation on being in the heart of the beast.
As the sun rose, the first thing for me was how great it was to actually be there and to see it. There I was, inside the mine, surrounded by all the giant piles of coal, literally inside the machinery that extracts it. Coal is such an abstract thing to so many of us. I talk to people and they are surprised: "We still mine coal in New Zealand?!" It is out of sight, out of mind. Being there made the climate crisis very real, rather than just numbers on a spreadsheet.
It was so stark: here I am on this big piece of machinery among the coal next to a poisoned lake, and on the silhouette of the hill there are cows grazing. Industrial dairying is killing off our waterways and contributing significantly to global warming. This is a key reason why New Zealand is actually really terrible in terms of climate change. This coal goes to Fonterra to be burned to dry milk powder to be shipped overseas. The whole system was so vivid to me in that moment: "It's all here, the cows and the coal together.”
For most of the day I locked myself onto the conveyor, and I had several police negotiating with me. Late in the afternoon our group made the collective decision to leave. So I said, "So if I unlock, you will not arrest me?" - “Yep” - and I said, "Alright", and we walked out. It ended with no one being arrested, which was nice.
As we walked to the gate we were greeted by a big crescendo of drumming and singing, a celebration of what we had done. It was so beautiful. It made you feel you are part of this thing which is a work of art as well as a political action.
We are taking very serious action about the existential threat of climate change. Direct action like this is intense and serious. But admidst that there was music and dancing. We hung beautiful colourful flags. People wore silly cow onesies. It is important to us that direct action becomes light and playful and a celebration all at the same time.

Read full interview with Michael, together with photographs:
Download pdf or view Online