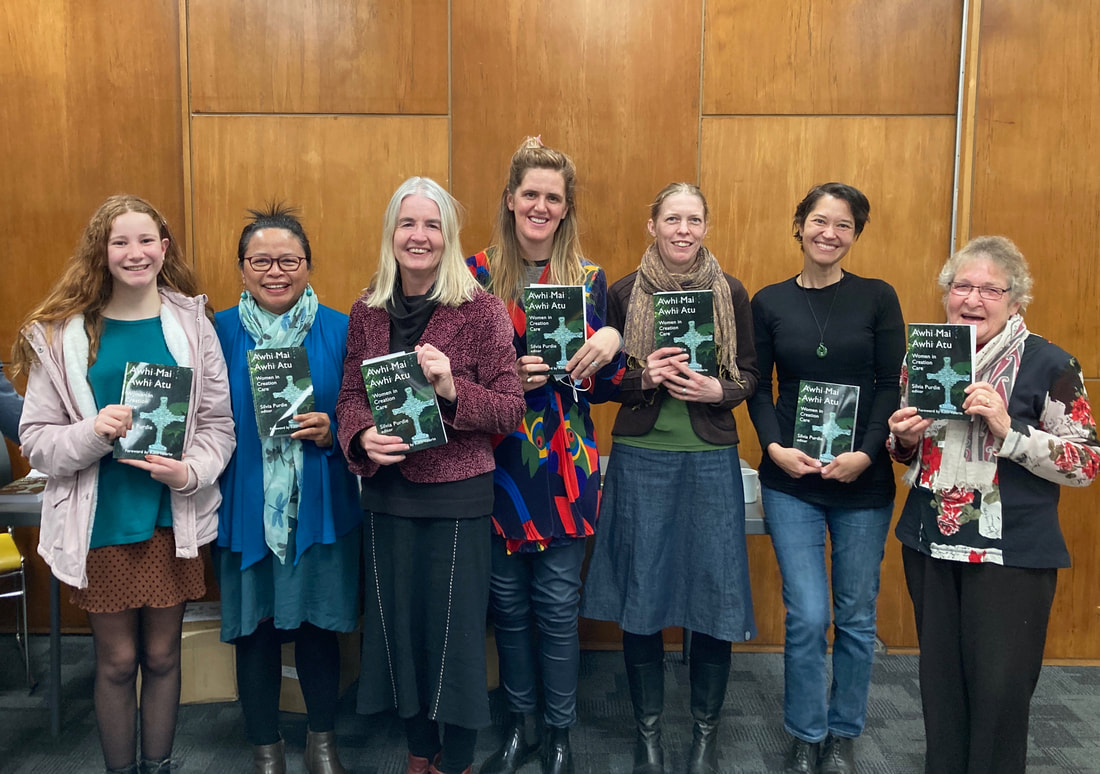 I’m just home from a trip which included launching our book Awhi Mai Awhi Atu: Women in Creation Care. We have now had three book launches: in Christchurch, Auckland and Wellington. One more next week in Dunedin. So far over 100 people have attended, including most of the 30 women who contributed to the book, together with friends and family and others from the creation care community.

Awhi Mai Awhi Atu grew from a handfull of interviews to a 330-page book telling the stories of 30 women who are leading in faith-based environmental action in a range of ways. It offers over 80 practical actions which churches can do to grow in ‘eco mission’. And it includes a wealth of prayer and poetry, in several languages.

There’s something about holding an actual book with your own name on it. It’s great that we have e-books these days, and mostly I read those, but an actual printed book still feels like a special thing; solid, real. Paper with all those little black marks on. Text which communicates meaning. Story which evokes emotion and can inspire hope and action.

I recently met Raya, the 5-year-old daughter of one of Awhi Mai Awhi Atu’s contributors. Christa McKirland tells the story of talking with Raya about heaven and insects and our royal priesthood expressed caring for the earth (!!). I showed Raya her page and she got very excited: “That’s my name! I’m in a book!”

Each of the women (the 30 contributors plus Ruth Valerio who wrote a foreword and Christa who helped us with theological reflection) grappled with the process of converting their unique personal experience into text. It is not easy to know what to say when someone asks you to tell your story. Life is complex, multilayered, our stories interwoven with others across different settings. Life is action and emotion, faith is difficult to name, convictions slip and slide as you try to pin them down.

As we gathered to launch and celebrate Awhi Mai Awhi Atu, we reflected on this process. Women affirmed the way I had interviewed them, how they found themselves naming in our conversations things they had not yet quite found words for. Each of us had a similar challenge as we faced the task of reading and re-reading, editing, wondering how others in our lives might react, feeling vulnerable and exposed as personal becomes public. And there is also something astonishingly powerful about creating a book, which will have a life of its own as others co-create it as they read it and bring their own stories into conversation with ours.

It’s a very old thing, you know. The alphabet was invented over 4,000 years ago by Semitic traders and picked up by the Hebrews. Since then the written word has formed humanity in countless ways.
As Christians we count ourselves as people of the Word, and value the work of the Holy Spirit in writing. In particular I honour Mark. As I understand it, Mark was the first to draw together the stories of Jesus in a coherent way, writing down what he had been told by eye witnesses, especially Peter, and even his own childhood memories. At some point he decided he had finished, and he gave it to others to read. People copied it and sent those copies all over the Roman world, and others edited and added to it. It’s hard to think of another book so influential. How was it for Mark, I wonder, as he heard other people reacting to his words, quoting them back to him?
​
I love feeling part of this same process going back thousands of years. To me, it’s really the same job description as Mark had: listen to the stories of what Jesus is saying and doing, and write it down.
I am enormously grateful to all those who shared, co-authored an supported this project. In the end my hope is to give glory to God, the ultimate author and story-teller.